Into the river continues... 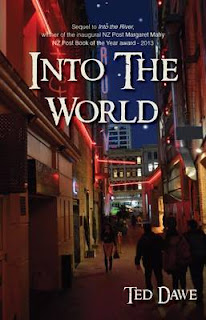 Into the world starts immediately where Into the River finished with Devon’s bold words ‘I choose freedom’. However had he known what being free really means he might not have been so confident. While I guess it could be read alone in my opinion it will make for a much richer experience and with much more understanding of where the main character, Devon is coming from, if Into the River has been read first. Into the river was a prequel to the writer’s earlier novel, Thunder Road.

About Ted Dawe  (thanks to The Children’s Bookshop Kilbirnie


Ted Dawe has written four novels; Thunder Road (2003), K Road (2005), And did those feet (2006) and Into the River (2012). He has also written a collection of short stories Captain Sailorbird and other stories (2007). He has received a number of major awards and in 2014 he was named an Honorary Literary Fellow by the New Zealand Society of Authors. He lives in Auckland with his wife, son and three cats.

Note: On this beautiful Sunday in Queen's Birthday Weekend I am now off to a rather unusual Book Launch where the main refreshments will be in the form of Doggy Treats. More later!
Posted by Unknown at 12:13

Email ThisBlogThis!Share to TwitterShare to FacebookShare to Pinterest
Labels: Into the world Ted Dawe, Mature Readers