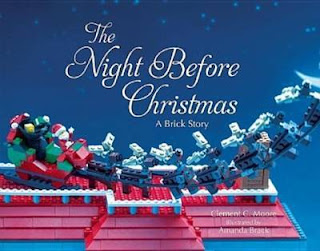 A very different look at a very well-known Christmas poem.  It is totally illustrated, with great imagination, with small coloured bricks which I felt rather sceptical about when I first read about the book. However, in the hands of Amanda Brack who has several other bricks titles to her name it is amazingly lively – a Lego lover’s paradise I feel. What really surprised me too was the freshness and charm of Clement Moore’s poem  - after nearly 200 years it reads so smoothly and I must find a group of children to share it with before Christmas Day (now coming far too close).
All ages
Posted by Unknown at 18:47