NZ Writer and Artist Robert MacKinlay  Blame Published and illustrated by the author  2015 $25, with free postage within NZ 258p


Available from robtmack@ihug.co.nz and also from www.silverstreamgallery.co.nz  and selected bookshops 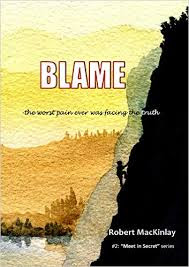 Time has passed since the end of Dare to Defy  (published earlier this year - see review below) which is about the same group of children but who are now older, much wearier and more street wise. The Germans are still in control but the Scout Group continues to function and in the face of tragedy close to home is one of the pivots that carries the children through. I first read this book in manuscript some time ago and I was truly moved to tears by the ending as I was again just now. Without ever becoming maudlin or sentimental, Robert MacKinlay manages to engage our emotions so we feel what it might have been like to be living as a child, 70 years ago, in such circumstances where you were never quite sure who was your friend and who your enemy.