Book One in the Ash Rover series 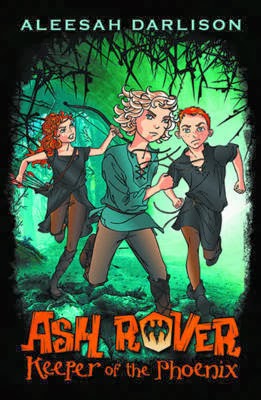 
Ash Rover and his friends live in poverty so when Ash finds a just-hatched Phoenix and becomes its keeper they are hopeful of a better future. However the Phoenix (a most eloquent bird) brings nothing but disaster and the children are put in real danger. Although the jacket and the environment suggest a possible medieval setting the three main characters speak and behave like today’s 10/11-year-olds  and this helps make the story one which reluctant readers may latch into. The plot unfolds in non-stop action and would make a good read-aloud. Two more books in the series are planned - Ash Rover: Taker of the Kraken & Book 3 Ash Rover: Sentry to the Centaurs. The author says on her website http://www.aleesahdarlison.com/ that she is currently finishing these two stories. Teachers’ notes are also available through this site.

Not long now until the opening of Writers Week 2014 here in Wellington. There are so many goodies to look forward to (the chance to meet Ulf Stark/ to hear Gavin Bishop deliver the Janet Frame Memorial Lecture/ to hear Eleanor Catton/ book launches and parties...   I will be up and down the Kapiti Coast every day for 7 days - perhaps I need a pied a terre!
Posted by Unknown at 13:22