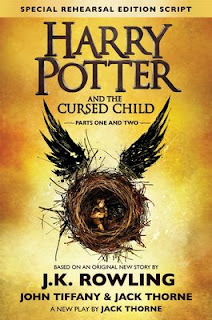 Harry Potter is now thirty-seven years old, is married to Ginny and has three children, Albus, James and his daughter, Lily. The story concentrates on the youngest son, Albus as he goes off to school and tries to come to terms with the terrifyingly full past inherited from his father. All the familiar trappings are there  - Platform Nine and Three-Quarters, Hogwarts, the Muggles, Voldemort, the cupboard under the stairs, Aunt Petunia- the only difference is that this is told in the form of a play. I had misgivings when I discovered this and wondered it a play with such an enormous cast of characters would sustain my interest but it is surprisingly easy (and quick) to read.  The two ten-year-olds (boys) to whom I lent it over the weekend actually didn’t seem to notice it WAS a play as it wasn’t commented on. It will be interesting to see if the initial enthusiasm for the book is kept up


Age? Hard to say! Probably for enthusiasts of ten and up but I could be proved quite wrong.