A Pekinese on the Wairarapa Coast 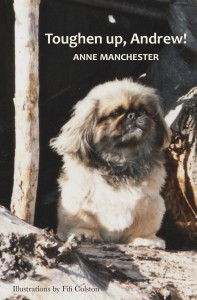 Andrew (named after Prince Andrew) is a small but sturdy Pekinese who really enjoys his home comforts. However, his family has decided he needs a bit of toughening up and in the four stories in the book he goes on holiday, meets a large black seal, goes crayfishing and learns to play football. These are true stories and Andrew was a very real little dog who **was loved and cherished by his owner and who I remember  trotting along the parade at Days Bay and Eastbourne as though he owned the world (which of course he imagined he did).  The book is enhanced by Fifi Colston’s endearing illustrations and the writer’s family photos. An enjoyable read aloud for both reader and listeners.
Year 3 up/ Age 7 up

** My computer spell check keep wanting me to change who to that but Andrew was definitely a who and I refuse!
Posted by Unknown at 11:47

Email ThisBlogThis!Share to TwitterShare to FacebookShare to Pinterest
Labels: Dogs