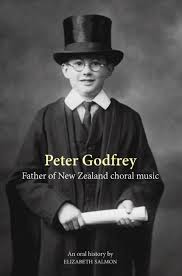 In a series of interviews, recollections and many photos Elizabeth Salmon has put together a highly readable, often entertaining and sometimes emotionally challenging life of Peter Godfrey, the man who has been named the father of New Zealand Choral Music.  Much of the book is in the words of the man himself egged on by the sort of questions that ask to be explored.


On Saturday afternoon, October 10th, nearly 200 people gathered in the social hall at Parklands, Waikanae where Peter now lives to hear the book being launched by Peter Averi, listen to some wonderful music and to spot the well-known musicians, singers and composers who had come to celebrate the launch. Peter now suffers from dementia so it was particularly moving when he stood up to faultlessly conduct the choir and then at the end of the launch to give a speech in which he thanked everyone for coming admitting that he no longer remembered their names but saying how happy he was to see them.


So much of the book is about young people and shows how Peter encouraged and helped them to achieve in their musical careers and, although the book is primarily for adults, it will sit happily in the Music Collection in secondary schools.