Break Out at the Rest Home 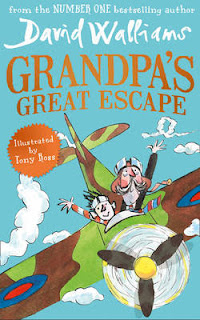 Grandpa has increasing dementia but it doesn’t stop him from living a rich and full life as he imagines he is still the flying ace he was in World War II. With his grandson Jack, he plans an escape from the Rest Home where he now lives, imagining it is a Prisoner of War Camp. With the dreadful Matron Swine in charge and her ‘army’ of helpers he could be forgiven for thinking this.  A great book to read aloud (a treat for both the reader and the listeners) although to my eye some of the writing is a bit, shall we say, ‘clunky’? I did wish the writer hadn’t kept referring to Jack as The Boy which cut into the magic of the tale. However, apart from that it is all go with its easy reading style, many words in large font to break up the pages and the amazing images from Tony Ross who must have really enjoyed having a character like Grandpa to bring to life.

Email ThisBlogThis!Share to TwitterShare to FacebookShare to Pinterest
Labels: Dementia