The real love story of Ophelia and Hamlet 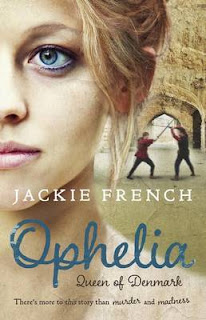 Told in the first person and with a wry sense of humour Ophelia fills the reader in on what very likely would have happened if we had been able to read between the lines in Shakespeare’s Hamlet. We are led to believe that Ophelia was a poor sweet innocent  (she actually only appears twice on stage in the play) but according to Jackie
French she was anything but innocent. She, as the daughter of a palace chamberlain was well aware of the intrigues of the place and was able to use them to her own advantage. This is the second book in the series by the writer who plans to reinterpret Shakespeare’s text but not to detract from it or make it unrecognisable. The first book in the series was I am Juliet (Google for details).
And the cheese? Ah you will have to read the book to find why that is listed as a theme.
Year 7 up/ Age 11 up
Posted by Unknown at 19:00