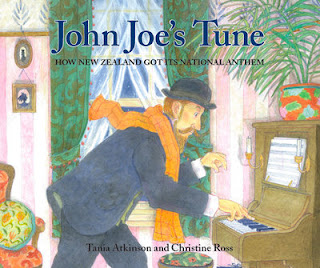 When John Joseph Woods, the principal of a school in Lawrence, Central Otago around 1876, saw there was to be a competition to put the music to Thomas Bracken’s words of God Defend New Zealand he felt this was something he would like to do. And, with the help of some animal friends he wrote the music  - and won the competition. This is a charmingly put together book and we learn so much about the times from Christine Ross’s detailed illustrations  - the post office/ clothing/ the ‘front parlour’/ the wool store/ the wintery Otago nights… Background information about John Joseph Woods, Thomas Bracken and Sir George Grey are included plus the words (in Maori and English) and music for the anthem.  This will be a useful resource at several levels as well as being a book to share with much younger listeners – just for fun.
What will Tania Atkinson turn her creative hand to next? Maybe the saga of the new (or not new) New Zealand flag.
Pre-School up/ Age 4 - up plus ESOL
Posted by Unknown at 13:01