Fantasy, Conservation and a Ship-in-a-Bottle 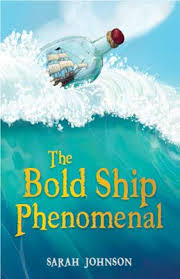 Life in Malachi’s house has been dull, dull, dull since his mother died and somehow school (especially science) doesn’t seem much better. Then, down on the seashore Malachi finds a bottle. A bottle with a fully rigged ship inside it smelling of salt and tar and – adventure.  Malachi’s mother had been the sort of person who could ‘find adventure in a supermarket carpark’ but even she would have been surprised at what was about to happen to her son when he stowed away in the back of a truck heading for the Waipoua Forest.  On board the truck is the bottle with the ship on which much activity is taking place as it prepares to sail with its load of cargo and in a corner of the truck tray sits a very clean looking, slightly grumpy pig with compelling and sad eyes. The story sparkles with unexpected events and happenings and yet Malachi remains a typical if rather lonely 11-year-old in whom it is easy to believe. A great read-aloud to boys and girls that could easily be finished in two sessions although you might feel yourself compelled to read it at a sitting as I did.
Year 4 up/ Age 8 up