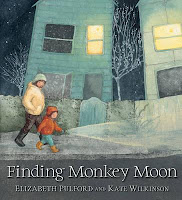 Monkey Moon, Michael’s favourite and most loved toy are inseparable. One night when it comes to be seven-thirty and time for bed, Michael finds Monkey Moon is missing. A great hunt ensues. First it is round the house but without result and then, Dad and Michael, well bundled up against the cold, go out into the streets and into the local reserve and playground. The softly drawn illustrations and the understanding words evoke the magic of the nighttime and the feeling of a close-knit family. Lucky Michael to have such a supportive father…

** Tomorrow I am off to Wellington to National Library and to the LIANZA Children's Book Awards. With such a strong list of finalists I cannot start to predict to myself whose names I will be putting here on Tuesday. Watch this space!

** Did you realise that, had she lived, Anne Frank would have been 86 last Friday, June 12th? Would she still be writing?  Several new articles about her have appeared over the past two days - just Google her name to find them.
Posted by Unknown at 12:17