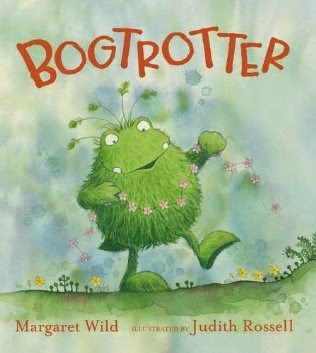 Bogtrotter, a large, hairy (green) creature with no imagination and just one tooth is really in a rut. All he ever does is to run up and then down and then across and then through the bog until it is time to go home, eat and sleep and begin the process all over again.  Margaret Wild has now written over 40 books and her creativity and imagination just keep on. If ever there was a plea for bogtrotters (and humans) to step outside the square and see just what they are missing, this is it. A satisfying story to share with a group with pictures large enough to be seen clearly. Judith Rossell is the artist (also prolific) who says she likes to get up late and to spend much of the day in her pj’s. Google both the writer and artist for an in-depth look at their work and their lives.
Preschool up/ Age 4 up