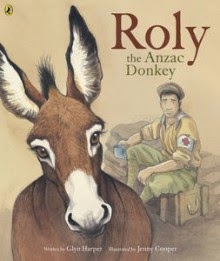 Roly tells the true story of Richard Henderson who also lives on in the famous photo of The man with a donkey. With several other World War I New Zealanders working in the Medical Corps, Richard Henderson used donkeys to save the lives of wounded men by helping to carry them to safety away from the trenches and down to ANZAC Cove.  Of course men and animals became very close and the end of the story, while not tragic, has to be sad when the time comes to part. Jenny Cooper’s illustrations make the reader feel every emotion – do look at the expressions in the donkey’s eyes as he feels love, anxiety, curiosity, at the end - resignation and then on the last page, contentment. There are two pages of background information and a couple of helpful maps.
What a change from the time when round ANZAC Day librarians and teachers were all scrabbling about trying to find suitable books on the topic as we are now almost spoilt for choice.
Year 2 up/ Age 6 up

Notes:
* Glyn Harper is Professor of War Studies at Massey University and has written other children’s books with Jenny Cooper – Le Quesnoy and Jim’s Letter.
* After the war Richard Henderson returned to teaching in Auckland but had to retire in 1934 when he went blind due to mustard gas. He died in hospital aged 63.
* Please look on this Blog tomorrow for another very special book on the ANZACS
Posted by Unknown at 17:06