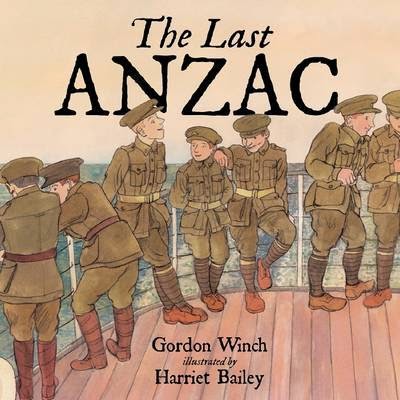 Alec Campbell, who died in 2002, was the very last of the ANZACs. He had lied about his age in order to enlist but after only six weeks in the trenches, he was invalided out and sent home, a Gallipoli veteran at only 17 years old and with a lifetime ahead of him. The story is told in with the structure of a young boy visiting Alec in his Tasmanian home the year before he died. I would have liked to have known more about the boy – how he got into this situation, what he really felt about it. Just a sentence would have done it. As it is he is really just used as a vehicle for the sort of questions boys and girls would be likely to ask and does, in my opinion, give it  all a slightly static Q & A feel. But the illustrations bring the story to life and emphasize, like Bob Kerr’s images in Best Mates  (Philippa Werry New Holland 2014) the extreme youth of most of the soldiers making them look in places like the naughty schoolboys they mostly were until such a short time before. This is a handsome and painstakingly created publication  - a large square book that is designed to withstand the handling and use it will get.