Young Adult Fiction (13 years and up) 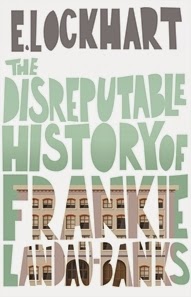 At 14 when she starts at the boarding school that was also attended by her father and sister, Frankie is a rather geeky, under-developed, unnoteworthy teenager. At 16 she has developed into a possible criminal mastermind and the story of what happens in those two years makes for a highly addictive read - I couldn’t put it down!  The book was first published in the USA 7 years ago so there are plenty of reviews and information about it on the net – nearly all positive.
Barbara Else who has just read it says:
Funny! Clever! Wise! Great fun! Feminism in action!  And that just about sums it up.
My only quibble is the jacket that is pallid and uninspired, in direct contrast to the contents within.
Year 9 up/ Age 13 up
Posted by Unknown at 12:57