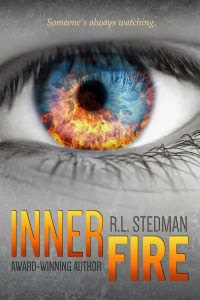 Christchurch and its continuing earthquakes seems a place to be out of for Corrine and her family and when an on-going genetic condition causes her to set fire to and destroy their home, they opt to move back to the UK from where they originally came.  However problems have a habit of following those affected and further fires happen plus the entrance of a group of sinister men in black and a large network of security cameras that seem to be linked. Corrine is sent to stay with her great-grandmother down in Devon and there she meets the gorgeous Rowan, aged eighteen and who provides the love interest to the story (plus some answers!).  This is a feisty thriller which is already pleasing a large group of teenage girls (see  www.goodreads.com/book/show/23247272-inner-fire for some of their comments).

If they are not carrying stock of this title bookshops, can order the title directly through Nationwide Book Distributors  http://www.nationwidebooks.co.nz It can also be purchased as both print and eBook through Amazon.com http://www.amazon.com/Inner-Fire-R-L-Stedman-ebook/dp/B00OXPXG04/ref=sr_1_1?ie=UTF8&qid=1416623982&sr=8-1&keywords=Inner+Fire Or – order it direct through the writer’s web page: www.RLStedman.com


Rachel Stedman won the Best First Book Award in the 2014 NZ Post Book Awards for Children and Young Adults and was a Notable Book in the Storylines 2014 list.
Posted by Unknown at 15:00