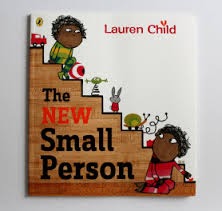 Elmore Green's parents thought he was simply the funniest, cleverest, most adorable person they had ever seen and Elmore Green felt this was true. Then something happened to change it all – a new, small person arrived on the scene and Elmore was expected to share everything with him including his parent’s interest and adoration. In this new title by Lauren Child she shows once more that she understands so well just what makes small children tick and what they want to read about that ‘ticking’.


Lauren Child was born in 1967 and grew up in Marlborough, Wiltshire. She studied Art at Manchester Polytechnic and London Art School, after which she worked in a variety of jobs. She also started her own company, 'Chandeliers for the People', making exotic lampshades.