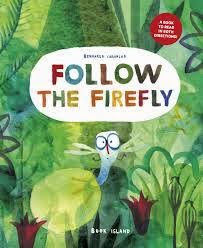 A wordless picture book follows firstly the journey of a firefly through a darkly dense forest to the outskirts of the city as it searches for a flashing light. Astute lookers will have noticed the white rabbit that is also keenly observing the proceedings. Then on the last page it turns out the experience is not over because we are now able to go back again, following the rabbit as he makes his escape back through the forest to rejoin his friends. The watercolour illustrations prove a real feast for the imagination to make up the stories and work out just what is happening (and every child may imagine something different).

Book Island customers from all over the world voted for the publishing house that started up in April 2012 and has released eight picture books in English and six in Dutch since then. 'We are totally blown away by the support we received not only from our customers, but also from our stockists in the six countries we're now distributing in,' said publisher Greet Pauwelijn at the Awards ceremony in Levin.