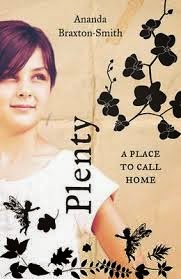 When her mum and dad make Maddy move away from her home in the city, far, far away to a place in the country called Plenty, she is sure she will not survive. She is sure too that nobody will ever understand her as her friends at her old school did – that is, no one except Grace Wek who was born in a refugee camp in Kenya.
Ananda Braxton-Smith wrote this story partly because she was uprooted as a child from her home in England and brought to Australia and partly because of the many news items she had seen showing children from the Sudan, Afghanistan, Iraq and Somalia (and other places, of course) who had been similarly uprooted. No one had asked them if they wanted to go. She writes in a note at the end of the book – When I see their faces I think how homesickness feels the same for everyone.
A simply written story, easily read and with much to think about at the end. A good read-aloud.

(This book actually arrived in my PO Box some weeks ago but it must have got silted under others – I read it at a sitting last night).