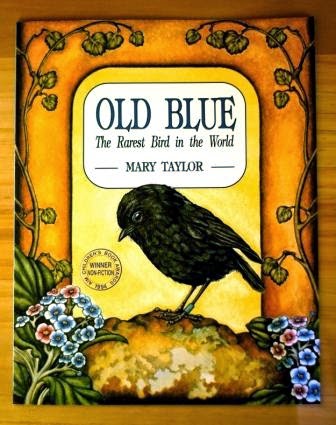 In the 1970s there were only five Black Robins left in the entire world and only two of them were females. Then into the frame stepped Dr. Don Merton from DOC (Department of Conservation) who, with his wildlife team set up a rescue and recovery programme. Thanks to this team whose hard work and many adventures which included abseiling the birds down the side of sheer cliffs, by 2012 the New Zealand total of Black Robins had grown to 256 birds.
Mary Taylor first wrote about and drew the images for this incredible story back in 1993 so it is a real pleasure to see this brand new edition 21 years later. Although it looks like a picture book the text is more suitable for confident readers although quite young people would enjoy having it read aloud.
If you go to the Chatham Island airport you will see a plaque erected to Old Blue ’saviour of her species’. She laid more eggs and mothered more chicks than any other Black Robin. When she died in 1983 newspapers throughout the world printed the headline Famous Robin Old Blue presumed dead.

Go to: http://www.nzonscreen.com/title/the-black-robin-a-chatham-island-story-1989 for an interesting documentary about the robins.