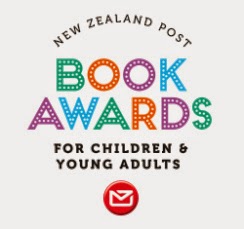 From Melinda:
Although I'm usually resident in Auckland, I've been working on some new stories while I'm based in Dunedin as the University of Otago, College of Education, Creative New Zealand, Children's Writer in Residence for 2014. I'm here until the end of August but I'm on the road for the best part of May starting with a school visit at Remarkables Primary in Queenstown. Then I will be taking part in a panel discussion with author Sandy McKay, chaired by Bridget Schaumann at the Dunedin Writers and Readers Festival on the 10th and then I'm off to Auckland the following week for the Writers and Readers Festival there, taking part in the Schools Programme during the week, and then a panel discussion on self publishing with Geoff Walker and Peter Farrell, chaired by Graham Beattie on the Sunday. The week after I'll be heading off on the NZ Post Book Tour visiting the Hawkes Bay, returning to Dunedin afterwards.

This will probably be the last post about my two ‘selected’ shortlisted writers, Melinda and Des Hunt, until nearer the Awards Week in mid-June when they have both said they will send me news and images of their ‘tours’.


In the meantime look them up on Google, visit the Booksellers NZ Facebook page:  https://www.facebook.com/booksellers

You could also search for reviews of their books on this blog so long as they were published after February 2013 which was the date I first started ‘posting’.