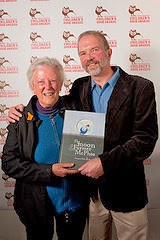 
Many congratulations to David Elliot, illustrator and writer from Dunedin who is the Storylines Children’s Literature Trust winner of the 2014 Margaret Mahy Award. This award is presented annually to mark a lifetime achievement in either writing, illustration, publishing or academic fields in the world of children’s literature (or all of these items). David will receive it at the Margaret Mahy Day to be held in Auckland on Saturday March 29th.


One of the many distinctive things about David’s work is that there is a feeling in all of his books that although the work is aimed at children, adults are also going to find real substance there as well.
In an interview I did with him in 2009, in answer to a question about his advice to children and young people who wanted to write/illustrate, David said


I also see in the interview that David told me it was his time, many years before, while living in the gatekeeper’s cottage at the Edinburgh Zoo that he felt was the key experience that led him to his career in illustrating. Wandering around the zoo at night, even going into the leopard’s lair to scratch the animal’s back, he began to draw the animals. As he said ‘playing around on the edges of illustration’.  And then…


On a personal level and on a totally different subject (!) :

I was so sad to miss out on being at the launch of the 2014 Writers and Readers Week held at the Embassy Theatre on Thursday this week. Two back-to-back funerals and another evening event meant driving down the coast from Waikanae where I now live, three times in 48 hours. While the spirit was more than willing the flesh, now slightly older than it used to be, decided it would rather just stay home and finish reading The Twin’s Daughter by Lauren Baratz-Logstead** and marking in the programme who I will go to hear in the actual Writers’ Week.

I could have spent time putting my books in alphabetical order but alas while they remain in a reasonably tidy state as far as looks are concerned as for logical sequence – it is chaos.