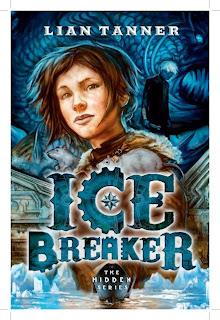 
On an ancient and rusting icebreaker that has been circling the southern icecap for the past three hundred years are three warring tribes -the Cooks, the Officers and the Engineers. All the knowledge in the world is now kept on the ship. Everyone belongs to one tribe or another – that is everyone except 12- year-old Petrel whose parents committed such a terrible crime for which they were thrown overboard that she has been totally ostracised. She is a complete loner until one day a boy is discovered, frozen half to death on an iceberg and is brought on board. This is an absorbing and exciting fantasy/adventure story that readers who loved The Keepers series should find equally enthralling. The Hidden series, Part 2 is due to be published in October 2014.

Lian Tanner, who lives in southern Tasmania, has had many career paths to follow. She has been a professional actor, an editor, a community arts worker, a tourist bus driver, a freelance journalist and a teacher.
Image of Lian Tanner acknowledgements to Matt Thompson, Mercury Newspaper, Tasmania
Posted by Unknown at 14:44