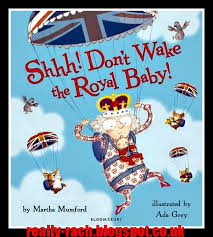 The Royal Baby is home at the palace and everyone looks delighted  - the Queen, the parents, the corgis, the relatives - including Red Haired Harry. There is just one problem though – the Royal Baby (gender at this stage not given) simply will not settle to sleep and fills the air with loud cries of protest. Everything is tried – the Queen takes him up in a plane and floats to earth with him under a large parachute, his father give him a helicopter trip, his mother rocks him gently. Although there is no real resolution to the story,  it is so charmingly told and illustrated that even the most ardent Over-The-Royal-Baby-Protesters will smile in appreciation.