At last a sweet smelling Santa! 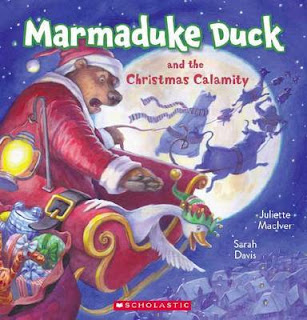 Just a few hours before they are due to take off for their traditional midnight ride through the skies, Santa, his band of elves and all of the reindeer take off for a short relaxing break. Carelessly, none of them look where they are going, plunge down the side of a cliff and are buried deep in the snow. Who will stand in for this traditional task? Who else but Marmaduke Duck, Bernadette Bear (a rather portly but very believable Santa Claus) and all the animals now recast as reindeer. This is a lot of fun to share and read aloud and how wonderful to find a recent book about Santa where he isn’t having bowel problems and the reindeer are not full of wind! This is the fourth book in the series and Juliette and Sarah seem to become more inventive with each one.
Pre school up/ Age 3 up
Posted by Unknown at 16:27