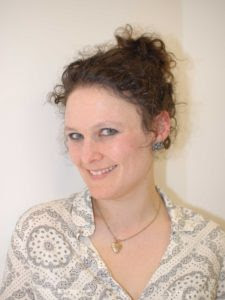 This is one of my favourite images of Katie  - I am not sure who took it
And here some very recent pictures of her, taken in Rome a couple of weeks ago. The photographer is Angus Ramsay 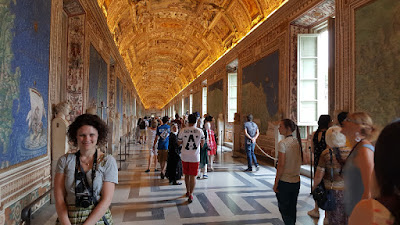 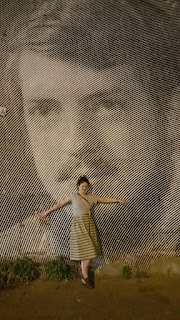 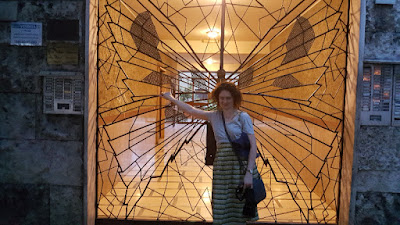 I first met Katie when she and I were on the Wellington Storylines Committee now several years ago. One of my most colourful memories of her is just before one of the Storylines Family Days here in Wellington and we had enthusiastically but possibly rather over ambitiously decided to fill the quite large venue with balloons – I know that it did take a very long time to prepare them – surely we had a mechanical aid for this?


I will see if I can find the photo of Katie surrounded by balloons  - she was such an enthusiast she probably would have blown them up herself if need be.  Later: Sadly this now seems to have vanished from the files. (I found many fascinating photos from the past while I was looking for it though)


Katie herself seemed to vanish from my life as people do sometimes but I heard she had gone to Auckland to work as the Commissioning Editor for the Penguin Group.  Then, about six weeks ago, to my great delight, I had an email from Susie Kennewell, the publicist at The Five Mile Press in Australia asking if I would like to see one of their new books Petunia Paris’s Parrot written by a New Zealander but now living in the UK and working as the Senior Commissioning Editor at Templar Publishing in Chelsea, London – Katie Haworth. So. That is how this ‘Talking To’ interview has come about …


Hello Katie
I feel there is some catching up to do here! Would you like to share a potted version of what has happened in your working life since you left New Zealand two years ago?


Well, I left Penguin New Zealand in February 2014 and travelled to London – via a few other countries as well. There were a few reasons for this. I loved Penguin and NZ, but I wanted to work in a country where the publishing industry was big enough to specialise more – it would be very difficult to just be a picture book editor in NZ, like I am now. When I got to London I spent maybe six weeks madly interviewing for publishing jobs at different companies – actually it was wonderful way to learn about the industry over here – and I started working at Templar in May 2014. Seems an age ago now. I’ve now been at Templar more than two years and I’ve been lucky enough to work on some fabulous books. This includes picture books and non-fiction such as Historium and Botanicum in the Welcome to the Museum series. I’ve also been doing a lot of spoken word poetry around London. I was actually inspired to do this by Dr Selena Tusitala Marsh who I saw performing at the Australia and New Zealand Festival of Literature and the Arts in London last year. I loved what she did and thought – I want to give that a go.


I only started trying to write picture books when I came to London. I think part of the reason for that was an excited, energised reaction to a new place, but also the sense that London is so big no-one cares what you do, which can be very liberating creatively. 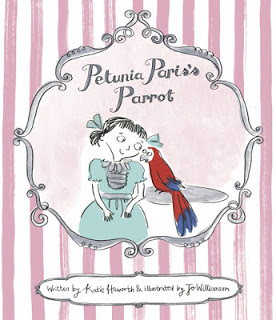 Petunia Paris’s Parrot is such a thoughtful story as well as being very funny. It arrived just as the children were about to break up for the holidays so I haven’t had a chance to share it with a group – yet.  Is there a back-story here?  How did Petunia come about?  (*Later – I have  now had a chance to share the books with children.  As I thought it went down wonderfully well and they especially liked the last colourful pages).


I’m often frustrated by consumer society’s tendency to throw stuff at a problem in the hope it will fix it. I’ve been guilty of attempted shopping therapy myself. The basis of many advertising campaigns is that having a new thing will make us happy. When I first moved to London I also had a flatmate who was a teacher at a very wealthy London private school and some of her work stories – we’re talking children coming home from school holidays with stories of amphibious launches and private islands – were horrifyingly fascinating to me. I also like big characters and improbable worlds – so setting something with a sort of New York Park Road mansion backdrop was very fun. It means I can create mothers with ridiculous feather hats and invent characters that are long-suffering butlers. 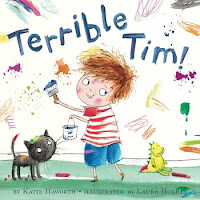 By browsing your Facebook Pages I find that Petunia was not your first book. Terrible Tim (sadly not available here in New Zealand) looks amazingly energetic and there may be others? Yes?


So far Terrible Tim and Petunia are the first picture books, but also look out for Emma Jane’s Aeroplane due January 2017 . . .


Do you have ‘access’ to a large (or even small) group of children on whom to try out your ideas and to whom to read your work?


Not really. I maybe should – I did have a lot of fun reading Petunia to a friend’s Brownie pack when it was at proof stage. I got them to be the parrot (squaark). When I was at Mallinson Rendel I spent a lot of time touring with Lynley Dodd and I think watching her and other authors interact with young audiences has given me an insight into how children will interact with a book.


Have you always been involved with books and stories? Were you a ‘Book Child’? Did you use the public library much when you were a little girl growing up in Auckland?  Did you have access to a good school/ college library?  Do you remember any books you loved to pieces when you were small?

My Mum is an obsessive book buyer and our house was always bursting with books. We used libraries too, but I have much fonder memories of the books that I owned and sometimes ate (literally. When I was reading Maurice Gee’s Halfmen of O series I got so involved I’d rip corners off the book and chew them. Forgive me, ladies and gentlemen of the book-loving jury, I was eight and hungry for literature . . .). I have fond memories of the North Shore Library and I still remember my Ancient Egyptian phase (I learned from a North Shore library book that Egyptian Pharaohs married their siblings – Blurgh!) and my Judy Blume phase, all library fuelled. We used to have a lot of good NZ and Australian fiction at home and I grew up with Gee, Mahy, Cowley, William Taylor, Mary Grant Bruce, Snugglepot and Cuddlepie, Peter Gossage, the Armitage’s Lighthouse keeper books and too many more to name.


What support is there for new and emerging young writers, particularly of children’s books, in London?


Is there a similar event to our Book Awards for Children and Young Adults held in the UK?


There is, of course, a much large population density in the UK, so there are lots of regional events. Edinburgh Festival, from which I’ve just returned , has a great children’s programme, as does Hay Festival, Imagine Children’s Festival in Southbank London, the Bristol Festival and many others. There are a number of children’s book awards such as the Waterstones Awards, the CILIP Kate Greenaway Medal, the Roald Dahl Funny Prize. For new writers I think groups like SCBWI British Isles (http://britishisles.scbwi.org) are very helpful because they help writers network and it’s a lonely profession.


The bookshops here (and my own bookshelves) are full of stories for children and young adults by writers from the UK (and the USA and Australia.) How much New Zealand material do you find in bookshops (and libraries) in London?


There isn’t much – I tend to see Lynley Dodd; Ronda and David Armitage; some of Gavin Bishop’s Gecko Press titles; Kate de Goldi . . . actually when you consider that we’re a country with half the population of just London that’s not bad. Oh! And Templar did publish Vasanti Unka’s Stripes! No! Spots! in the UK.
There are a lot of children’s books from overseas here though – so it’s not all British by any stretch. We get a lot of good European books translated into English like Maps by the Polish illustrator/writer couple Aleksandra Mizielinska and Daniel Mizielinski.


Where would you like to see yourself in the world of books in 10 years time in 2026? Do you think there will be big changes in the ways children and young people access not so much non-fiction but stories by then?


I hope I will still be there! I’d still like to be publishing and writing.  Something! Anything! I just want to be playing some part in telling stories.


I honestly don’t know the answer to the second question. Non-fiction publishing for children has, for example, recently become focussed on beautiful illustrated books and high quality formats and very much tied to the physical book. 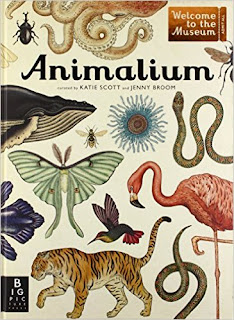 That wasn’t expected even in 2013 when I went to the Click on Kids conference in Sydney, which was a seminar exploring digital publishing for children. We were saying things at that time about non-fiction publishing being very, very difficult. In the UK now it’s a massively successful and innovative area. Titles like Animalium illustrated by Katie Scott or Shakleton’s Journey by Will Grills have gone gangbusters in the UK.


I honestly think children will still enjoy and respond to words and pictures on a page. In 2026 there may be different ways of doing this, but I think the core heart of what storytelling is won’t have changed that much.


At the moment it’s still actually very hard to get interactive book apps to work commercially. They are hugely expensive to make but the price consumers are prepared to pay is often much lower than for a book – digital is perceived as more ephemeral.


There are interesting possibilities for things like augmented reality. How do we take a format like Pokemon Go and use that in narrative?


Thanks so much Katie and I look forward to seeing and talking about Emma Jane’s Aeroplane early next year.
Posted by Unknown at 15:14