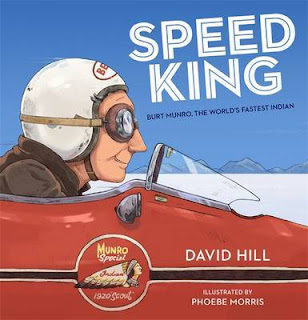 Speed King
Picture Puffin  2016 $25.00hb 32pp
ISBN 978 0 1435 0722 2
Themes: Burt Munro/ Invercargill NZ/ Motorcycles/ Older achievers
Burt Munro was named The World’s Fastest Indian after his death.  He had spent his life trying to make the perfect run on his rather old Indian motorcycle and often nearly killing himself in the attempts. This story of determination is stunningly brought to life by David Hill with supporting illustrations by Phoebe Morris (the ‘team’ that created First to the Top – the story of Ed Hillary – last year).  And for some fortunate children who live in the areas there is the replica of Burt’s bike to be seen at Te Papa and a whole section about him and his bike at the Southland Museum and Art Gallery. Also there is the DVD of the movie (‘plenty in stock’) available.
The hardback is one of those productions that is a pleasure to handle.
Year 2 up/ Age 6 up Great for ESOL students
Posted by Unknown at 12:55