From the Number 1 Bestselling Author of Middle School comes a new heroine: 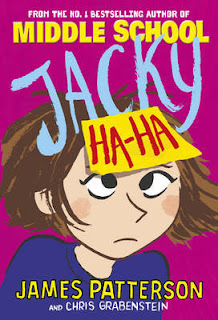 
Life isn’t all a bowl of laughs for Jacky Ha-Ha although she likes to pretend it is. James Patterson has created a new and quite vulnerable heroine in Jacky who sets out to write down for her own children what life was like for her 26 years ago in 1990 in a family of six girls with a mother serving as a staff sergeant in the Army in Saudi Arabia and a father who is hardly ever home. Although much of Jacky’s memories are almost over-the-top hilarious there is an underbelly of sadness and poignancy that most readers will pick up on. The whole narrative is enhanced by the on-every-page illustrations from Chris Grabenstein.


James Patterson has been the most borrowed author in UK libraries for the past eight years in a row and his books have sold more than 300 million copies worldwide, making him one of the biggest-selling authors of all time. He lives in Florida.

THE SPORT OF READING

Cross your fingers. Cross your toes that the weather improves tomorrow and all planes carrying children from all around New Zealand will land without being diverted at Wellington Airport in time for the National Finals of the Kids’ Lit Quiz to be held at National Library Molesworth Street starting at 1pm.


See this Blog on Sunday for some photos and the announcement of THE WINNERS who go through to the WOLRD FINALS to be held for the very first time in New Zealand in August. This will be as part of the IBBY Congress in  Auckland.  More later…