Carlos found the harmonica in the attic 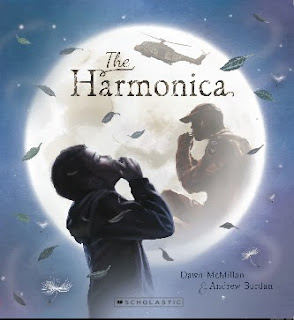 Carlos’s Uncle Jack is long dead – presumably killed in World War II – but Carlos’s mother had told him many stories about his uncle and especially of the wonderful music he used to play on his harmonica. One day, in the attic, Carlos happens across a box of Uncle Jack’s old treasures and there, as shiny and silver and as perfect as it ever was, is Uncle Jack’s old harmonica – waiting to be played. This is a gentle and thoughtful story about family love and the ties that exist between the generations. The full-page illustrations totally reflect the mood of the story. Dawn McMillan is a truly versatile writer who can produce slap-stick comedy like I need a new bum and now this story …
Preschool up/ Age 4 up


Tuesday February 9th I have just received the following from Penny Scown who is the senior editor at Scholastic NZ in which she says:
Thanks for the kind review of The Harmonica.
Just wanted to point out, however, if you look a little more closely at the image, that the war Uncle Jack died in is much more recent than WWII – probably Afghanistan or somewhere like that. Also bearing in mind that Jack is Mum’s brother and Mum is probably only in her 30s …
I didn't think it through did I? When I re looked at the images there are very many clues to say of course it is a much more recent war and as for Mum - yes she would be an old woman should it be WWII....