Another Tale of Fontania -coming soon 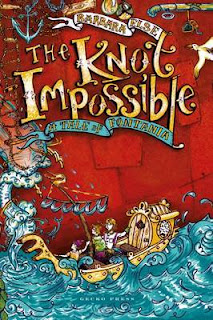 Rufkin is a failure - there is no doubt about it – a child from a popular acting family he suffers from stage fright, his school reports all say ‘could do better (much better) and his mother thinks he is lazy. All of which explains why, at the beginning of the story he is on his way to work in a ship salvage yard while the rest of the family go on holiday.  But. Take a look at the jacket (another creation from Sam Broad) and you will realise at once that the story is going to take us far away from land-based salvage yards to the adventures of the sea and Rufkin is about to take Centre Stage.  Flip through the chapter headings  - disasters ahead/ oat bars and tiddlers/ jaws in the river/ glinty black buttons to get a flavour of what lies inside the pages.


With her inimitable wit, sense of story and eye for detail Barbara Else has created for her readers another enchanting story, the fourth in the Fontania series.


I didn’t want to finish it… Please don’t let this be the last Fontania title. There are so many more characters living there just waiting to let their stories OUT and be told. New characters to meet/ old characters to check up on.  What happens for instance to Rufkin? Does he ever get to win a barrel-boat race? (see p. 322)  (In a book world where so much gets worse and worse it is heartening to see a series that gets better and better and better and…