A tale of betrayal, jealousy, brotherly love and freeriding. 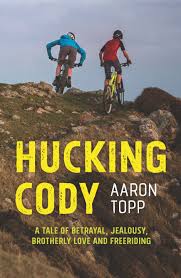 For Cody, life is at its best when he is crouched over the handlebars of his mountain bike concentrating on the bush lined trail ahead and forgetting the baggage of worries that wait for him later. Then he falls in love with a girl and a new bike and the kaleidoscope that his life has become away from the trail become suffocatingly real.


Aaron Topp, who lives in Hawkes Bay, has already proved himself as a writer of books for young adults to watch out for. His first book Single Fin, based on the true story of a boy obsessed with surfing, won the NZ Post Book Young Adult Fiction Honour Award in 2008  and was also on the Storylines Notable Books list.Google his name fo rmore info.
Go to:  http://tinyurl.com/o8ywjj2
for an interview with Aaaron on Desna Wallace's Blog.  Desna is the librarian at Fendalton School Christchurch
Year 9 / Age  13 up