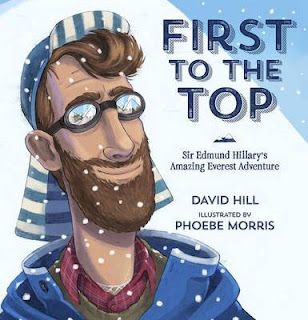 
In 32 large and colour filled pages with simple yet succinct text, is the whole story of Sir Edmund Hillary (shy as a child – determined and courageous as an adult), his mountaineering partner Sherpa Tenzing and of one of the main characters in the book – Mt Everest. The story is told with tension, with excitement and in places with poetry, perfectly matched throughout by the captivating images and illustrations.


Preschool up/ Age 4 up (I tried this out with a group of four year olds at the Waikanae Kindergarten this week and we must have spent at least half an hour looking at the pictures and talking about them.) Recommended for ESOL


David Hill spent most of his childhood and teenage years in Napier. He studied at Victoria University of Wellington and became a high school teacher, teaching both in New Zealand and the UK. He became a full-time writer in 1982 and is one of this country's most highly regarded authors for children and young people. David's books have been published internationally and his short stories and plays for young people have been broadcast here and overseas.


David has won awards for his writing in this country and overseas. He was made a Member of the New Zealand Order of Merit in 2004. Most recently My Brother's War, published by Penguin in 2012, won the Junior Fiction and the Children's Choice Junior Fiction awards in the 2013 New Zealand Post Book Awards for Children and Young Adults.


As a child, Phoebe Morris always dreamed of becoming a zoo keeper and working with animals. However, persistent allergies meant that she ended up drawing them instead. As an adult, Phoebe now spends her time drawing a range of things - either on paper, or on her custom PC named 'the Millennium Falcon'. Without Wellington's seemingly endless coffee supply, it is unlikely that the illustrations for First to the Top (with David Hill, Puffin, 2015) would ever have been completed. Find out more about Phoebe's work at http://phoebe.design/