What's in a constellation? 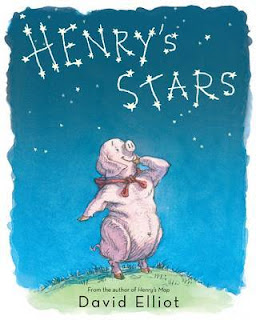 Themes: Constellations/ Farmyard animals/ Perception/ Sequels
Henry the pig is overcome with excitement when, looking up at the starry sky, he sees the Great Pig in the Sky as clear, as clear. He can’t wait to share the news with the other animals in the farmyard but to his annoyance no one sees a pig – they see a horse or a sheep or a cow. A wonderfully understandable story for even the youngest listeners about how we may all see things differently – but who is to say who is right.  The story is filled with David Elliot’s cheerful illustrations of this endearing group of animals as they ponder these ideas.
Just published, Henry's Stars is a ‘companion’ volume to Henry's Map, which was  one of the US School Library Journal's Best Books of 2013.
For more information abut the writer/illustrator who in his time has been a teacher, a gatekeeper at the London Zoo, a dishwasher in the Antarctic  and a … go to www.davidelliot.org

Preschool up/ Age 4 up
In 2014 David was awarded the Storylines Margaret Mahy Award for his lifetime contribution to children's literature.
Posted by Unknown at 19:06