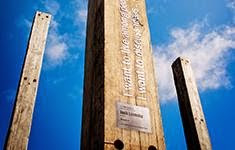 Back in March a few of us from the Wellington Writers* Walk committee got together with Jack Perkins from National Radio’s Spectrum programme. It was a rather gusty day but the mike was well wrapped up and we all went round the wharves looking at the benchmarks and tablets on which 23 writers who have had links to Wellington have some of their most memorable words inscribed.  We didn’t visit all of them but of those we did, we read the words aloud and talked about some of the things that made the writers stand out in our minds  - (sometimes they were a bit quirky). This is of particular interest to secondary people but we have taken groups of primary students around the route – some of them have gone back to school and created their own Writers’ Walk.


Today we have been hearing a promo (just about 30 seconds) on National Radio with some of us reading aloud – a weird feeling if you come into the room and are not expecting it. Here is the link to the National Radio website that tells you more and also has some photos:

* Note: Writers does not have an apostrophe in this case


The words on Jack Lasenby’s ‘pillar’: I want to live among people who believe in truth and freedom...I want to discuss ideas... I want books... From The Conjurer, Oxford University Press, 1992
Note: We only had time to see a very few writers and Jack was not on our flight path.
Posted by Unknown at 18:45