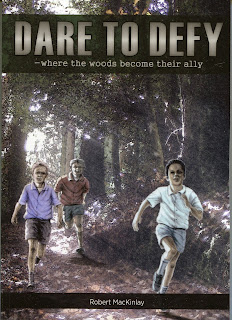 Available from robtmack@ihug.co.nz and from 30.5.15 also from www.silverstreamgallery.co.nz  Post Free within New Zealand.

It is the beginning of World War II and Nazi Germany is about to invade Belgium and the surrounding countries.  They are determined to unite all Youth Movements into one National Socialist Movement and groups like the Scout Association (which was strong in Belgium) had their regular meetings and camping banned completely. However, it was going to take more than Nazi Germany to keep the six children whose story is told here from participating in an activity that was a way of life for them and became as the war went on, a life line for them all and their families.  We observe the reality of the war through the writing of each of the children in mainly shortish but exciting ‘bursts’ making this as well as an individual read, a great read-aloud story for the few minutes before Bell Time. This is an unusual and very original book that I feel deserves a wide readership– it will be enjoyed. The story will continue in two sequels to be published over the next months – Blame and Believe in Tomorrow.


(I will be asking a group of children up here on the Kapiti Coast to review the book so watch out for their thoughts in a few weeks time. Just give them all time to get over the flooding first. )
Posted by Unknown at 18:11