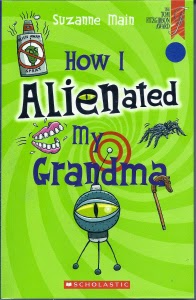 Michael is prone to unfortunate happenings so when at 4.23 in the afternoon, shortly after he arrives home from school, he turns his grandma into an alien, he is not all that surprised. What follows though, and at a tremendous pace, is a great surprise to everyone as Grandma helps mastermind the counter attack to the invasion of earth by Extraterrestrials. Michael and his close friend Elvis are used to keep the plot alive and the story going in a very convincing way.   Winner of the Tom Fitzgibbon Award 2014 this will be greatly enjoyed by readers who like easily read non-stop action, a slightly OTT plot and many laughs.
The book was launched a few days again in Auckland at the Storylines Day by Penny Scown from Scholastic. It will have its Wellington launch by Fleur Beale at the Children’s Bookshop in Kilbirnie on Saturday April 18th at 4pm.
Year 4 up/ Age 8 up
Posted by Unknown at 14:58