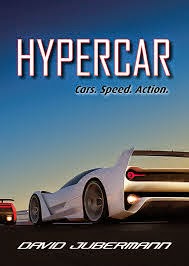 Ollie allows an almost unknown young woman to drive his beloved Porsche GT3 in which she is clocked at over 270ks, crashes the car and then does a runner leaving Ollie, an incredibly wealthy young man, to totally face the music on his own. All the money in the world though can’t stop the subsequent events and Ollie is deported and his car confiscated and he finds himself in the exotic locations of Las Vegas, California and Detroit where he becomes immersed in the illegal street racing culture.


Readers who have enjoyed David Jubermann’s earlier books will find the atmosphere of speed, ambition and money (and what it can buy) are all addictive and his old (and new) fans will find a compelling, unputdownable read.


David is a responsible writer who prefaces all his stories (except, obviously, for his love story – Just Us) with a plea never to try to replicate any of the racing sequences he describes and to always drive according to the speed limit and road conditions.


Go to www.davidjubermann.com/books/hypercar/hypercar-poster. This will bring up a high-resolution poster – be patient though – it takes a while to download but it prints out really well.