The kids are in charge! Exciting new development makes the New Zealand Book Awards for Children and Young Adults even more significant.


The highly coveted Children’s Choice prize in the New Zealand Book Awards for Children and Young Adults is today given an extra boost with the announcement of a bold new judging process. It will engage children, their teachers, librarians and their schools because the children are now in charge of their own prize.


Previously, New Zealand children have voted, online or via posted cards, to decide which books are their favourites among the finalists selected by the awards judges. From the 2015 awards on, they will be free to pick their favourites from all 130-plus books submitted into the awards. “The result may throw up completely different titles, books the judges didn’t pick, but that’s the beauty of it,” says children’s author Kyle Mewburn, who is a trustee of the awards’ organiser, the New Zealand Book Awards Trust.

From 2015 a Children’s Choice Award will be given for each of the four awards’ categories – Picture Book, Junior Fiction, Young Adult and Non-fiction.


Under the new system, schools, or children’s books groups run by libraries will indicate that they wish to select five finalists in one or more of the awards’ four categories. Once all votes are in, the five books in each category with the highest combined scores nationwide will be listed on a website where children from all around New Zealand can  vote for their favourites. In the past there has been only one Children’s Choice winner; now there will be four.


“We are very excited about this new development,” says Book Awards Trust chair Nicola Legat. “These iconic book awards have great heritage and this change to the Children’s Choice Award will add to their importance. We believe children will be excited about being so integral to the process. We have had great support for this initiative from the School Librarians Association of New Zealand and we are sure that schools will grasp the opportunity to become involved.”


The New Zealand Book Awards for Children and Young Adults will be presented in Wellington on 13 August at a ceremony at Government House hosted by the Governor-General, Lieutenant-General the Rt Hon Sir Jerry Mateparae.

For a registrtion form for your students go to:


Not such good news:

Things in the worlds of books have been a bit dire the last month or so with the devastating announcements from National Library of the cuts, no actually slashes to their services to schools. More of that tomorrow when I will feel stronger after having missed the SLANZA meeting to discuss the cuts at National Library on Wednesday because a macrocarpa tree fell on the railway tracks of the train ahead of me and then becoming stuck in a grid lock traffic jam after the (very successful) protest 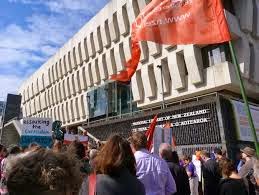 rally outside National Library on Thursday (banners are heavy to hold aloft after the first hour!) This afternoon was taken up with a talkative and positive meeting in Waikanae chaired by Wellington Regional SLANZA president, Karen Clarke and held in a sunny garden sitting at a table under a spreading (oak?) tree.
Posted by Unknown at 17:12