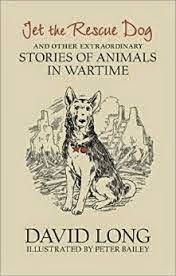 Near Hyde Park in London there is a stone and bronze memorial to the courageous dogs, cats, birds, horses and even a bear that went to war along side the humans who were fighting.  From animals in the Blitz, London 1940, the Western Front in Northern France 1914 and a memorable cat that saved a ship’s crew in the Yangtze Incident in the Chinese Civil War in 1949, these are stories that help to show not all heroes and heroines are human. Don’t be put off by the very unremarkable look of the publication – beige cover and black and white pen drawings. It is not a book many children would pick up for themselves but the stories are riveting and well worth following up – there is much about many of the animals in the book on the net. It is also worth following up on the work of Peter Bailey whose textured drawings may be found in books by writers such as Tony Mitton, Alan Ahlberg, Dick King Smith, Laurie Lee, and Philip Pullman

Email ThisBlogThis!Share to TwitterShare to FacebookShare to Pinterest
Labels: Non-Fiction Age 7 up