Barbara Else, illustrated by Sam Broad


The Volume of Possible Endings 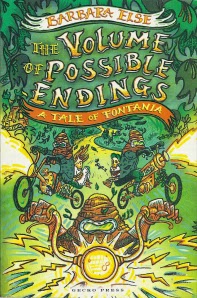 To be the only child in a town full of adults and to be living with your very demanding and totally unusual brothers might be a handicap for some 12-year-olds.  Dorrity though, whose tale (in five parts) this is, is gifted with a creative imagination (like the writer) and leads us, her readers, off into possibly the best adventure yet in the Tales of Fontania series. You only have to look at the jacket of the book, created by Sam Broad, to realise this is not your ordinary adventure story. Could this be Dorrity strapped to the back of a fast moving motorcycle? Who is the young boy, similarly captured? and look at the leading figure on a much larger cycle – definitely sinister, maybe a little menacing and certainly not out for a Sunday Club Ride. Although this is a standalone story, as are all the books in the Fontania series, familiar characters appear before us – just more mature. It was good to catch up with Sibilla - remember her as a very vulnerable baby in The Travelling Restaurant? She is now a tall young woman wearing boots up to her knees and down to her knees she had a green skirt so stiff it looked like a lampshade. Descriptors like this are never overdone – but they are just enough to let us see the action or the character.


The Volume of Possible Endings will not be published in The States until next year but already it has received enthusiastic reviewing space from the prestigious Kirkus Reviews. This was the magazine that gave the first book in the series The Travelling Restaurant its highest accolade of a Starred Review.


There are few books that I ever have time to read two times but this was one of them and I was left with this feeling - MORE PLEASE! And, if you go to Barbara’s Blog


at http://talesoffontania.com/ you will find this is already happening!

Email ThisBlogThis!Share to TwitterShare to FacebookShare to Pinterest
Labels: Fiction 10 up, Fontania Series