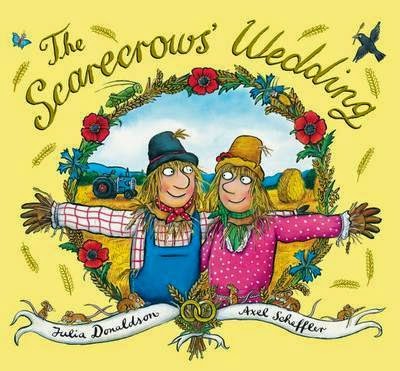 Betty O’Barley and Harry O’Hay, two of the most endearing scarecrows I have seen in a picture book, are in love, want to be married and are planning a wedding that no one will ever forget. But - they were not planning on the wicked actions of Reginald Rake which included a scarecrow’s most dreaded element – FIRE! This is exactly the sort of new picture book you would expect from the creators of The Gruffalo and The Gruffalo’s Child.  Julia Donaldson was awarded an MBE for services to literature in 2011 and was the UK Children’s Laureate 2011-2013


Axel Scheffler was born in Hamburg and moved to England in 1982 (age 25). He is known and admired for his witty and humorous illustrations.
Preschool up/ Age 4 up