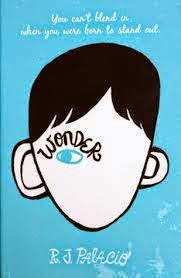 When Wonder first came out in 2012 it received ‘rave’ reviews (and rightly so) but it always seemed to me that something was missing. We had the points of view of what was happening to Auggie from his contemporaries at school, friends, teachers and most of all from Auggie himself but there was one POV missing. It was that of Julian, the initiator of most of the bullying, of the taunts and real cruelty. Now, with a chapter to himself, we are given insights that will move many to tears and takes us back to an incident in World War II. You haven’t read Wonder?  It is the story of an eleven-year-old boy who was born with extreme facial deformities. As Auggie who tells his story with candour and with heart-breaking humour says – by the way. I won’t describe what I look like. Whatever you’re thinking it’s probably worse. Up until now Auggie has been home schooled (and he is an extremely bright young boy) but now his far seeing parents have decided it is time he went to school and this is the story of his first year there.  Please read it if you have not already done so and preferably the 2014 edition.