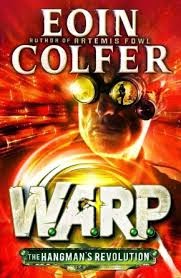 A boy magician, a Victorian gangster and young FBI Agent, Chevie Savano are trying to return to nineteenth century London where the military technology of the future has been brought back in time. This follows on the first book in the series The Reluctant Assassin which although it doesn’t have to be read first, it might help. Fans of the Artemis Fowl series will find much that is familiar in plot and action. There are some rather gruesome descriptions but somehow you feel Eoin Colfer was smiling at the reader (see below) as he wrote them!