THE SEQUEL TO I AM NOT ESTHER 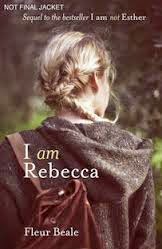 Remember Esther who managed to ‘escape’ the emotional and physical ties of the strict religious sect in which she found herself way back in 1998 in the much read and admired story I am Not Esther? What happened to the family Esther left behind? In this sequel we hone in on the feelings and actions of the family particularly Rebecca and to a certain extent, her twin sister, Rachel as they try to negotiate the already heady trials of simply being a teenager. For them it is complicated by the closeted environment in which they live and the ever present presence of their all-powerful father. He is a meticulously drawn character whose every word they obey without question. Don’t listen to him we want to scream at the girls as yet another milestone in their lives is thwarted. This is totally addictive reading with some almost unbearable twists and turns in the plot. And, yes, Esther does appear several times!
Recommended.
Year 9 up/ Age 13 up

IT’S ALMOST TOO MUCH.
I began the week by reading Joy Cowley’s Speed of light. I have just finished
I am Rebecca and now, beside my bed to start tonight is Anna Mackenzie’s sequel to Cattra’s Legacy – Donnel’s Promise.
What riches! I MUST have an early night.
Posted by Unknown at 18:59