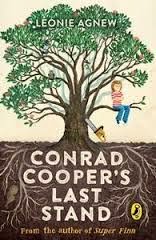 Conrad thinks he believes in Tane as he talks and shares his worries with him. But, he is not too sure if a Maori god would really want to listen to a Pakeha kid. However, he needs to persevere as Tane is the only adult ‘voice’ that seems to be listening as Conrad struggles with his search for a faith in God and with increasing problems with his family on the home front.  Written against the  background of the Bastion Point Occupation in Auckland in 1978  with a sense of humour to which children will really relate makes for an amazing and totally original story.
Recommended.