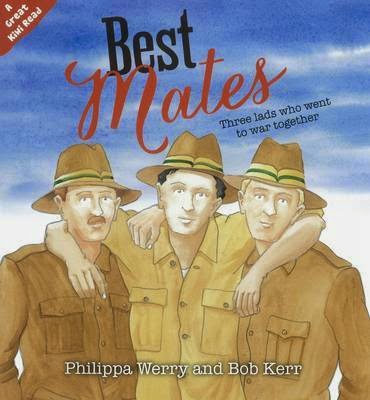 
Best Mates
New Holland Publishers 2014  $19.99pb 32pp
ISBN 978 1 8696 6441 4
Themes: ANZACS/ Friendship/ Gallipoli Campaign
Three young Kiwi boys were mates  - they lived on the same street, went to the same school, played together and grew up together. Then they all went off on a big adventure. They went off to war. Philippa Werry and Bob Kerr have collaborated here to bring a graphic picture in simple but telling words and stunning illustrations of the Gallipoli Campaign, of friendship and of the Australian, New Zealand and Turkish soldiers who were involved.
A double page spread at the end of the book gives much extra and useful information.
There is something here for such a wide range of children  - from the very young up to intermediate age  - and just in time for ANZAC Day on April 25th. .

Philippa will be going to Gallipoli on April 14th as part of the Gallipoli Volunteer Programme. See her blog http://goingtogallipoli.blogspot.co.nz for news of her preparation for the trip and her travels.

Bob, who lives in Wellington, works in a studio in the old Berry & Co building in Cuba Street, a place where the young soldiers went to have their photos taken before they left to go to war.
Bob has also visited Gallipoli.

Acknowledgements to New Holland Publishers for this information about Pippa and Bob.
Posted by Unknown at 16:03

Email ThisBlogThis!Share to TwitterShare to FacebookShare to Pinterest
Labels: Non-fiction