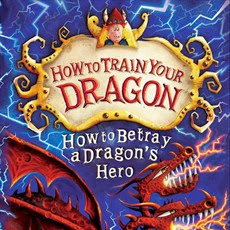 
This title is number 11 in the series about Hiccup Horrendous Haddock the Third who grew to be a fierce and strong Viking warrior but in the books he is still quite a young man and has much to learn – often at his peril. In this, the second to last story in the series, although Hiccup with his companions, is hiding high up in the mists of the Murderous Mountains and the fates seem to be gathering against him, he is determined to reach his dream and become King of the Wilderwest. This is a series that has kept its impetus, humour and appeal since the first book, How to train your Dragon was published ten years ago in 2003. There have been spin-offs in the form of a movie, a TV series and short stories but I think you get the very best of Horrendous from the real thing - the book. This would be a great book to share with a group but it would need to be told by a really skilled reader-aloud because of the tongue-twisting names of the characters and the pace of the plot.

Email ThisBlogThis!Share to TwitterShare to FacebookShare to Pinterest
Labels: Fiction age 9 up