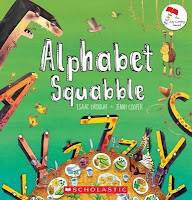 It has been worked out that A and C and P are all popular letters in the land of Alphabet and they have become rich and famous but what about the not so often used X’s and Y’s and Z’s? Shouldn’t they have a say and some words as well?  When these three letters decide to stand up for themselves and to journey the world in search of five words each something very special happens for every letter in the alphabet community.

A clever story that has something to say to all ages and illustrations that have given Jenny Cooper full reign for her fertile imagination. A deserving winner of the Storylines Joy Cowley Award for 2012.