Set around 10 years before the Trojan War, this is a story of Ancient Greece. It concentrates on Menelaos who is the son of the recently assassinated Atrius, the high king of Greece and on his friend Odysseus. In a volatile atmosphere of treachery and action Odysseus, while he tries to be helpful often only succeeds in making things worse.  An attractive, ‘modern’ looking book, easy to read with plenty of humour and one that will be enjoyed by a large audience, including readers who up until now may have thought stories about Ancient Greece were just not for them!

The book was launched this week at the Ellerslie Racecourse in Auckland and Cath sent me this photo of herself and her family before the event. For more info about Cath, for whom this is a first book, go to:
http://www.catherinemayoauthor.com 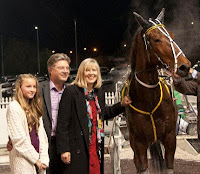